Home Uncategorized The Nearly Free University and the Emerging Economy: The Revolution in Higher Education by Charles Hugh Smith 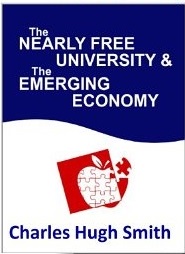 My three greatest interests in higher education are (in order): affordability, student persistence, and technology-enabled education. Given the size of the sector, researchers or authors usually write about one of those topics in a focused or nuanced paper/book. Having read a reference to the above book that appeared to focus on affordability and technology-enabled education, I ordered a copy. The author, Charles Hugh Smith, is neither an academic nor an economist. He clearly is an independent thinker. His website, www.oftwominds.com, is rated as one of the top 10 alternative financial websites by CNBC with more than 20 million page views. While Smith’s opinions certainly do not reflect the mainstream thinking by regular higher ed scholars and critics, it’s important to consider them as we look at how the economy and technology may influence change in higher education.

Smith proposes that an alternative to the current system should be the nearly-free provision of instruction and knowledge and accreditation of students directly instead of institutions. The latter step will eliminate higher education’s ability to extract huge premiums for the scarcity of its accredited diplomas and certificates. Through deductive reasoning, the author further posits that the sole purpose of higher education should be to prepare students to establish and maintain a livelihood in the emerging economy. Critical thinking and embracing lifelong learning are two purposes generally espoused by others for higher education, but Smith states that these skills are taught in primary and secondary schools and don’t need to be repeated. He further states that the only major change in higher education over the past 40 years has been the substantial increase in costs which are four to 10 times the inflation-adjusted charges of 40 years ago and, alarmingly, are primarily funded by debt.

There are four technology-enabled solutions that the author predicts would free higher education from its cartel status. These are: (1) accredit the student, not the school – this removes control of credentials and supply from the cartel and establishes the value of what the student learns based on objective standards; (2) restructure learning so that it no longer depends on large physical campuses and costly administration – eliminating the need for the traditional sites of college learning will eliminate the sole remaining reason for the cartel to charge a premium; (3) tailor the curriculum to the needs of the real-world emerging economy and the methods of learning to the individual student – digital courses are available 24 hours a day, 7 days a week, conforming to the needs of the student; and (4) eliminate the artificial scarcity of admissions and accreditation – make higher education open to all, reducing the concept and pricing of scarcity.

By utilizing MOOCs and more traditional labs for hands-on learning/training, Smith proposes that a four-year education that costs approximately $100,000 can be reduced to $4,000. He states that this price reduction is necessary given the reduction in middle-class jobs and income by the ongoing technology revolution. Higher education’s solution to this, according to Smith, has been to promote the concept that to remain more competitive, students need to earn a master’s or doctoral degree, further reinforcing the need for their cartel-like product and increasing the cost to the student and to society. The unjust cost/benefit of an undergraduate education is ignored by the cartel and much of society.

By virtue of my position as a member of Smith’s higher education cartel, I should blast the book and his premises. Unlike our current elected leaders, I value my ability to read contradictory opinions and determine where we as members of traditional higher education need to focus on change and improvement. I wholeheartedly agree with him that technology has the potential to substantially reduce the costs of higher education. For a number of reasons – including the reluctance of politicians to implement incentives that reduce the viability of institutions in their backyards – that change won’t occur as fast as it might in a less restricted and more open market.

I agree that accreditation needs to be more responsive to certifying non-traditional providers but believe that a role for accreditation is better than opening the market to a million different providers making claims that would take the market decades to determine the quality of the certification. Both of these changes, increased affordability through technology-enabled education and expansion of accredited providers, will occur on the edges and will influence higher education for years to come.

While I don’t agree with all of Smith’s conclusions, I highly recommend his book for the way in which he challenges the status quo in higher education and recommends a solution that could provide an alternative mode of affordable education.