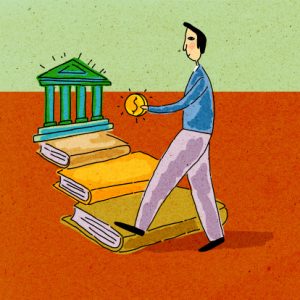 Few topics dominate the discussion about higher education more than affordability. This is a global issue that deserves continual examination as to the relationship between the cost and outcomes of earning a degree. Central to this debate are a few publications that are capturing unique views that I’d like to share. First, I keep up with the British perspective by reading Times Higher Education, which covers research and policy articles addressing the cost benefits of college along with many other relevant topics. In keeping with the British tradition, I recently found two bluntly titled articles in the April 5, 2014 issue of The Economist: “Making College Cost Less” and “Is College Worth It?”

The editors of “Making College Cost Less” inserted the subtitle, “Many American universities offer lousy value for money. The government can help change that.” The authors remark that the return on higher education in America varies dramatically, which is particularly important since most 18-year-olds in America attend college to get a good job. They cite the statistic that the price of college has increased four times faster than inflation since 1978 and that much of the reason for the increase has to do with improved and new physical facilities as well as “armies of administrators.” The authors continue, “In time, digital education is likely to put the squeeze on universities” and that “traditional universities will have to provide better value for money or go out of business.” They write that the U.S. government should go further by requiring universities to find out how much their graduates earn and to provide students with an estimate of the rate of return on the investment in their degree.

Somehow, this doesn’t seem very different from the proposed gainful employment regulations aimed at “for-profit” colleges and community colleges in the U.S., which I have argued should apply to all colleges and universities if they are to be implemented fairly and uniformly.

” Is college worth it?” has the subtitle, “Too many degrees are a waste of money. The return on higher education would be much better if college were cheaper.” Much of this article portrays the differences in earnings based on degrees earned by students. Engineering graduates of UC Berkeley can expect to earn $1.1 million more after 20 years than someone who did not attend college. Arts degrees vary by institution with graduates of the most selective universities generally doing well and graduates of arts programs from lesser known institutions not faring so well.

A study by PayScale was cited and the author writes that of the 153 arts degrees in the study, graduates of 46 of those programs would have been better off investing their tuition in U.S. treasury bills over the 20 years and graduates of 18 of the programs saw returns worse than zero. The U.S. economy is partially to blame, but the high cost of college and the high debt load of graduates are also to blame according to the author. In addition, Chegg, a company that collaborated with PayScale in its study, stated that only half of graduates feel prepared for a job in their field, and many managers believe that students are not ready for the workforce after graduation. While the author writes that the PayScale report is limited by the low level of participation of graduates, he states that reports like it—and others—could go a long way toward informing students and parents about the value of certain degrees and the return on investment of expending tens of thousands of dollars on tuition.

The handwriting has been on the wall for some time now that the cost of college is an increasingly top-of-mind issue for students and parents. For working adult students, it has been an issue lasting even longer since much of the funding for their education is self-paid or borrowed. In an era with more and more information available online, institutions that provide transparency in terms of costs and potential earnings will benefit from enrollment of students and parents seeking evidence of a positive return on their tuition investment.