Home Workforce Development The Legitimacy and Illegitimacy of Credentials 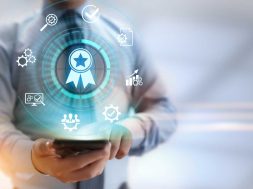 I was an early subscriber to LinkedIn. The service allowed me to list my professional qualifications and experiences and connect with people I knew and people with similar experiences and interests. I’ve watched it evolve over the years as its subscriber base grew to include just about everyone.

Among the many recent trends I observed on LinkedIn are the touting of badges and credentials by anyone who has received them. I cannot take a condescending “holier than thou” approach since I have accepted one or two of these as I “earned” them, a few for attending conferences.

Before there were badges, there were certificates, diplomas, and licenses. Perhaps my earliest exposure to the display of these credentials was at my physician’s office where his framed diplomas, fellowship certificates, and licenses were visible for patients to see. As an adult, I framed my diplomas and my licenses and visited the offices of colleagues with similar displays. Depending on our profession, some of us appended our names on our business cards and stationery with the initials of our degrees, certificates, or licenses.

Whether it’s the specialization of our more educated generation, the connectedness of the digital age, or the demand of instant access to digital credentials; it’s likely that many factors are to blame for the explosion of credentials. I see so many credentials scrolling down my LinkedIn newsfeed that I question the relevancy and legitimacy of many of them.

In February 2021, Credential Engine published a paper that updated their count of the number of post-secondary and secondary credentials in the U.S. Credential Engine, a non-profit funded by several notable foundations, has a mission to “bring transparency to all (my italics) credentials, reveal the marketplace of credentials, increase credential literacy, and allow students, workers, employers, educators, and policy makers to make better informed decisions about credentials and their value.”

To that end and since 2017, the team at Credential Engine created a common taxonomy through the Credential Transparency Description Language (CTDL) that allows apples-to-apples comparisons between credentials as well as to map the connecting points between credentials, education, training, jobs, and competencies. A national Credential Registry was established to contain and publish information about credentials. The CTDL taxonomy is required in order to upload a credential to the registry.

At the date of the report, Credential Engine identified 967,734 unique credentials in the U.S. These credentials are distributed among the following sources:

Table 1 in the report breaks out the count of credentials by the 16 categories established by Credential Engine’s team. I appended a partial illustration of the table below. 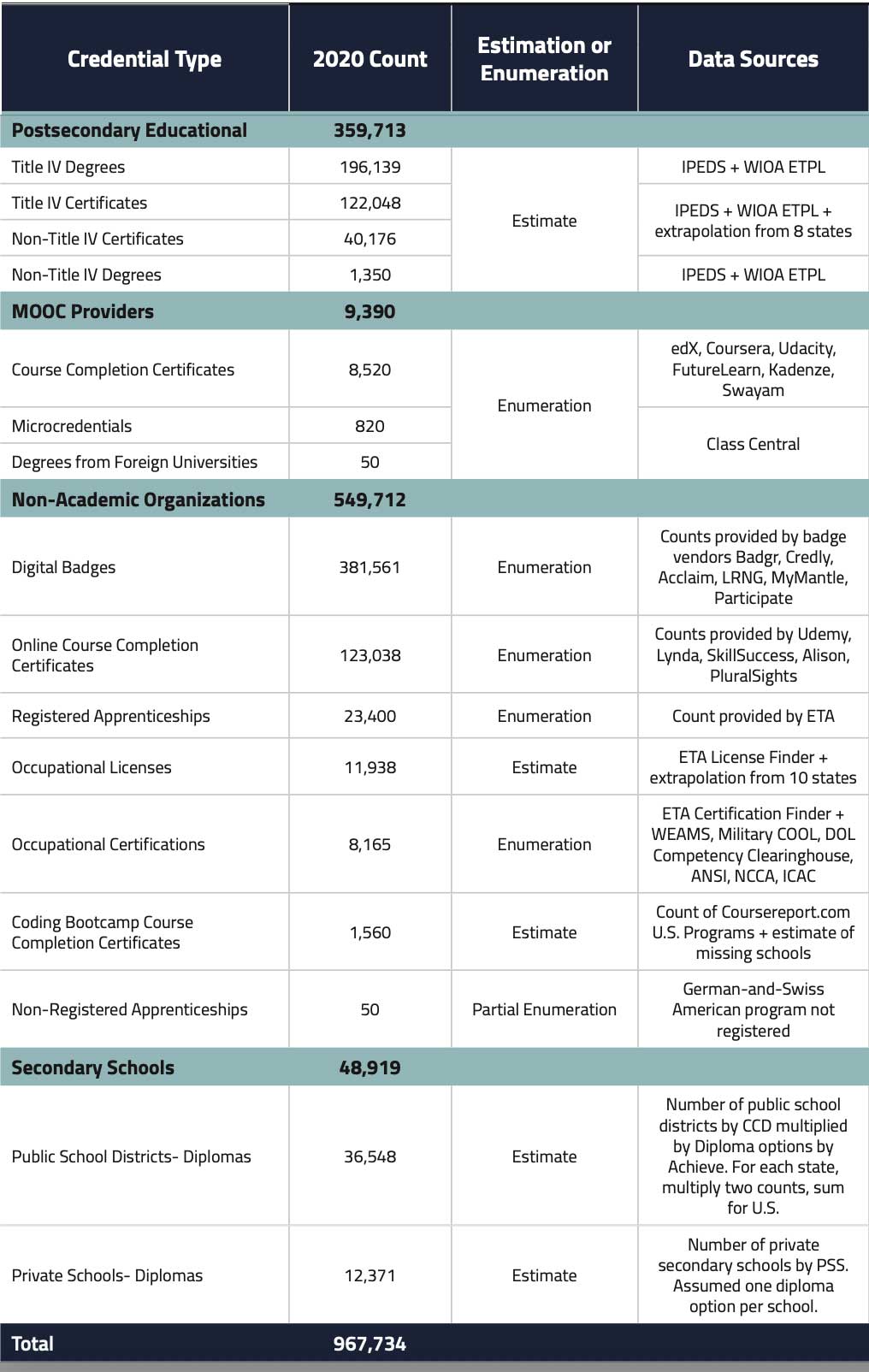 As the demand for more micro credentials increases from learners and employers, there will be more course completion certificates and micro credentials issued by these “traditional” providers. Will they be entered into the Credential Registry? Unless there’s a national mandate, I doubt it. There are only 29,430 credentials currently entered in the registry. We also know that the traditional postsecondary education providers believe that their credentials are impeccable and are unlikely to view the labor necessary to populate this registry as a reasonable initiative.

As the demand increases for micro credentials, especially micro credentials that can be stackable and transferrable for credit to a degree, many more will be offered by colleges and universities. What if colleges and universities decided to issue a badge for every course completed like MOOCs? Meanwhile, non-academic providers already offer 549,712 badges, certifications, licenses, apprenticeships, etc.

Despite the work from Credential Engine and the financial support from foundations and 19 of the 50 states, this categorization of credentials is likely to get messier as the providers respond quicker to the needs of the market than the needs of the policy makers and consumers.

We’ve already seen several large companies like Google, Amazon, and IBM begin to offer their own certifications and credentials. Given their size and stature in the job market, prospective students are more likely to seek a credential from them than a traditional educational provider.

I envision more partnerships between educational providers and the organizations providing licensure or certification for professionals. I also envision more “friction” between states with growing populations and employers whose “blessing” will be required for certain certifications like their “blessing” for curriculum leading to professional licenses like public accounting, physical and occupational therapy, etc.

The alignment of credentials is possible, but only if all interested parties want to make it work. The U.S. has never embraced national standards for learning outcomes at the secondary and post-secondary levels. Despite our abilities to utilize artificial intelligence (AI) and other tools to analyze millions of courses and credentials, without universal acceptance, it’s another initiative likely to fail.

Without an ability to categorize and identify the quality of credentials, sub-standard providers are likely to proliferate. If this occurs, learners and employers may revert to mandating degrees from traditionally accredited educational providers in order to differentiate credentialed individuals. I think something in between bedlam and conservatism is more likely, and employers will be a major directional determinant.