When I read Disrupting Class: How Disruptive Innovation Will Change the Way the World Learns, I enjoyed Clayton Christensen and his co-authors’ application of the potential of disruptive innovations to the K-12 classroom.  As a result, I looked forward to reading his new book, The Innovative University: Changing the DNA of Higher Education from the Inside Out.  It didn’t disappoint me.

Christensen and his co-author, Henry J. Eyring, take a different tack in this book.  Approximately 60-75 percent of the book provides a narrative of two institutions of higher education, Harvard University and Ricks College, now BYU-Idaho.  While many observers of higher education may not consider Harvard an innovator, decisions made by its presidents over its several hundred year history have influenced the direction of American higher education.  Whether it’s the four-year baccalaureate degree, the creation of various majors, the design of a baccalaureate degree to include general education courses, professional schools with a requirement that applicants complete a bachelor’s degree before matriculating, faculty tenure, the “publish or perish” culture for faculty, or athletic programs; most of those foundational principles that we take for granted today had an evolutionary turn at Harvard.  Christensen and Eyring make the case that the problem with higher ed today is that most four year colleges and universities aspire to “be like Harvard” but only five percent have a realistic chance of pulling it off.

The disrupter to the sector according to Christensen and Eyring is online education.  Whether it’s a for-profit university (DeVry University is one of those cited in the article) or a non-profit (Western Governors University is cited), the authors maintain that the cost of operating online universities is half of the cost of operating a traditional university for many reasons (no athletic teams, no dormitories, no cafeterias, expensive student services, use of adjunct faculty, etc.).  The lack of a need for physical classrooms provides online universities with the ability to offer classes year round.  Also, the recent focus of accrediting bodies on learning outcomes has caused the online programs to take advantage of technology and measure outcomes more effectively in many cases than traditional programs whose accreditation was achieved decades ago.

The story of Ricks College in Idaho has a Harvard connection through the Eyring family and others.  Ricks’ beginnings as a two year college and evolution to a four-year, teaching university is a fascinating story.  Along the way, Ricks’ direction was heavily influenced by its affiliation with and sponsorship by the Mormon Cchurch.  The authors note the elimination of intercollegiate athletics, upward move to a four-year institution, implementation of internship programs, implementation of blended learning programs by utilizing remote sites operated by the Mormon Church for periodic face-to-face classes, and the pricing of the university’s online programs on the margin in order to compete with the online programs run by for-profit universities.  According to the authors, BYU-Idaho is competitive because its leaders didn’t wait to be overrun by the disruptive online programs.

Christensen and Eyring make a great case for online learning as a disruption and provide a few relevant examples of the remaking of BYU-Idaho into a thriving institution in an era when many colleges and universities are taking steps backward rather than forward.  However, their book does not provide detailed analyses of best practices in online education that are continually refined by online educators on a monthly, weekly, daily, and even hourly basis.  By the time a traditional institution wakes up to the need for online courses and programs, it may find itself far behind the learning curve and even further behind in its ability to implement the cultural changes required to compete in a world influenced by the pace of technology. 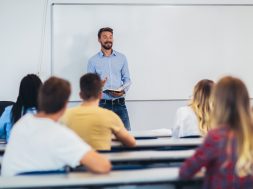