The Economic Benefits of Closing the Achievement Gap in American Schools

The Economic Benefits of Closing the Achievement Gap in American Schools 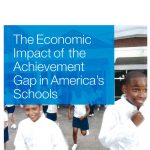 The authors state that “the United States lags significantly behind other advanced nations in educational performance and is slipping further behind on some important measures.”  An interesting element of this particular analysis is that this international disparity in educational achievement affects every American student equally, regardless of race, income, or location.  Citing research published by the Program for International Student Assessment (PISA), the authors provide some discouraging statistics.  For example, “American 15-year-olds are on par with students in Portugal and the Slovak Republic, rather than with students in countries that are more relevant competitors for service-sector and high-value jobs like Canada, the Netherlands, Korea and Australia.”  Additionally, the report finds that whereas 40 years ago, the United States was a world leader in high school graduation rates, today it ranks 18th out of 24 industrialized nations in this category.  Further, the report’s findings reveal that low-income students in the United States fare significantly worse than low-income students in other industrialized nations in educational attainment.

The McKinsey report notes that “on average, black and Latino students are roughly two to three years of learning behind white students of the same age.”  Adding urgency to this particular disparity is the authors’ finding that “in eighth grade math, US Latino students perform below students in Malta and Serbia and about as well as students in Malaysia; US black students lag behind Romania and Bulgaria and roughly match students in Bosnia and Herzegovina.” As these population groups are growing faster than the white population in America, this gap will compound the problem if steps are not taken to improve the education achievements of blacks and Latinos.

The income achievement gap is equally as severe as the international and racial achievement gaps in American schools.  Students living in poverty (for purposes of this report defined as those eligible to receive free school lunches), according to the McKinsey report, are approximately two years of learning behind the “better-off” students.  On a larger scale, schools located in predominantly underprivileged areas and serving students of lower economic statuses are underperforming schools in more affluent areas of the country.  Even within states that have high National Assessment of Education Progress (NAEP) achievement scores overall, income disparities among students reflect in their state-wide test scores.  In Massachusetts, for example, a state with one of the highest overall NAEP scores, “students eligible for free lunch are six times more likely to be below ‘basic’ in fourth grade math than ineligible students.”

The system-based achievement gap examined in the McKinsey report provides another striking example of how the United States is failing to provide adequate educational opportunities for many American students.  There are obvious differences in teaching methods, funding, and overall student achievement between the states, within the states between different school districts, and even within the same school districts between different schools.  For example, the report notes that “poor black students in Washington, DC, are roughly 4 years of learning behind poor white students in Massachusetts.”  (emphasis in original)

The report takes a dual-focused approach, examining the benefits for individuals as well as for the nation and economy as a whole in closing the achievement gap in American schools.  There are obvious benefits for individual students in the United States working to mitigate the achievement gap.  For example, the report states that in New York City, “students who scored in the top quartile in math in eighth grade had a 40 percent higher median income twelve years later than students who scored in the bottom quartile.”  Other significant benefits would come to individual students if the United States reduced the achievement gap.  The authors contend that “the less educated a person is, the likelier that person is to end up behind bars” and that “a high school dropout is five to eight times more likely to be incarcerated than a college graduate.”  According to the report, the better educated an individual is, the more likely he is to live a healthier lifestyle, including maintain health insurance and avoid high-risk health activities like excessive drinking or smoking.

There is still reason for optimism, however, and for all its doom and gloom the McKinsey report drives home the message that all hope is not lost for American students.  The report points out that “in some areas, the racial gap has been overcome,” citing Latino students in Ohio who are outperforming white students in 13 other states on the eighth grade NAEP reading test.  In addition, some students who find themselves in low income households manage to maintain the motivation to do well in school despite the various achievement disparities described in the report.

Overall, the McKinsey report reiterates the findings of many other reports that describe the achievement gap among students of varying racial, economic, and geographic backgrounds.  The substantial and striking difference in the McKinsey report, however, is its analysis of the individual and national economic ramifications of such disparities.  In considering the educational standards of other nations in comparison to those of the United States, the McKinsey report leaves little doubt that if American students are to compete for jobs with their international counterparts, we must work diligently at minimizing the achievement gaps described in the report.

tags: A Nation at Risk achivement gap McKinsey & Company National Assessment of Education Progress Program for International Student Assessment The Economic Impact of the Achievement Gap in America's Schools
previous Department of Education Study Finds that Online Education is Beneficial to Student Learning
next Characteristics of the Class of 2020