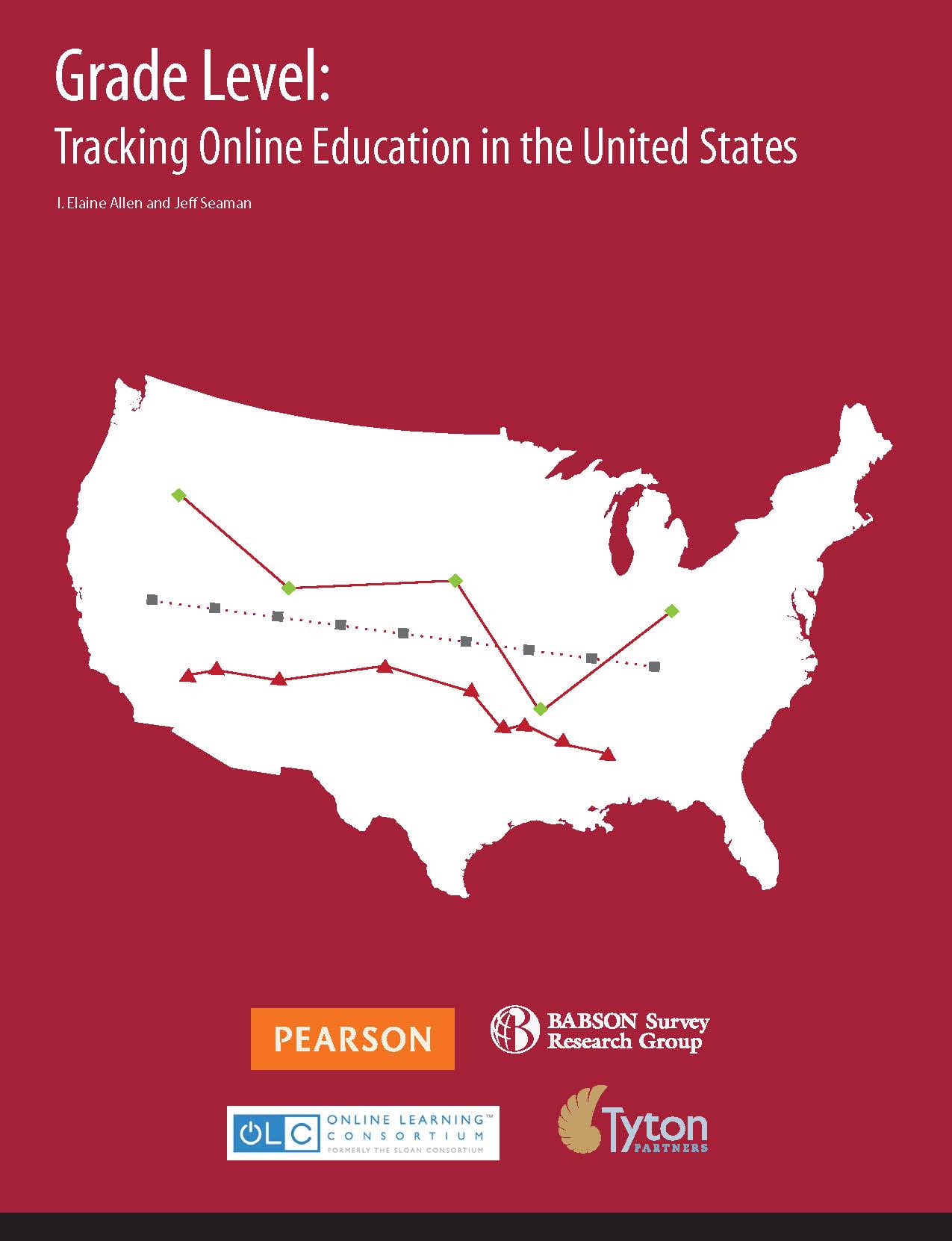 The 12th annual report from the Babson Survey Research Group (BSRG) sponsored by the Online Learning Consortium (formerly the Sloan Consortium) that tracks the growth of online education has been released.

This year’s report is notable for several changes. After 10 years of discussing the need for the Department of Education to track online enrollments, the National Center for Educational Statistics has begun to track online enrollments through its IPEDS data collection process. While there are some contrasts in data definition between IPEDS and BSRG, researchers Elaine Allen and Jeff Seaman believe that the long-term benefits of having an officially-sanctioned entity collecting and publishing the data will be more rewarding to institutions offering online courses and programs. For that reason, they have opted to utilize the enrollment numbers for online courses as reported by institutions to IPEDS, rather than to BSRG, as part of this survey. The authors also included a more detailed comparison of the IPEDS data conducted by Phil Hill and Russ Poulin that lead to some conclusions about the need for clarity in definitions and reporting among institutions.

Proponents of online learning will be thrilled to read that the proportion of chief academic officers reporting that online learning is critical to their institution’s long-term strategy is at an all-time high, representing 70.8 percent of respondents in this year’s survey. Institutions reporting that online education is not critical to their institution’s long-term strategy represent an all-time low of 8.6 percent. A negative outcome of this increase is that the competition for recruiting online students is likely to further intensify.

With IPEDS now having two years of reported online registration data, OLC reports that IPEDS growth in online students is 3.7 percent, the lowest growth rate ever. However, the rate of growth varied by sector with for-profit, four-year colleges recording their first ever drop, an enrollment decrease of 8.7 percent, public four-year institutions increasing enrollments by 7.2 percent, and private nonprofit, four-year colleges up by 12.7 percent. Part of the explanation for this change may be the later entry to the online market by private four-year institutions.

For the past three years, the survey has asked questions about Massive Open Online Courses (MOOCs). The 2014 survey results are similar to previous years with a small percentage (8 percent) of institutions offering a MOOC. Nearly half (46.%) of all institutions report that they do not plan to offer a MOOC, and only 16.3 percent of academic leaders believe that MOOCs represent a sustainable method of offering online courses. The most frequently-cited objective for MOOCs is to “increase the visibility of the institution” (26 percent of institutions). Driving student recruitment was the second most frequent reason cited by 20 percent of institutions with “innovative pedagogy experimentation” at 18 percent and “flexible learning opportunities” cited by 17 percent. More than half of all chief academic officers state that they believe that MOOCs are not a sustainable model for offering classes.

Public four-year and two-year institutions offer online courses at very high rates, 92 percent for four-year and 96 percent for two-year. Academic officers concur that the quality of blended courses is superior to that of online-only courses. However, consensus among faculty about the value and legitimacy of online education, primarily at traditional schools, is decreasing with 28 percent of chief academic officers stating that their faculty accept the value and legitimacy of online education. According to Allen and Seaman, “the more intensive the online presence is at an institution, the more likely faculty are going to accept it.” The reverse is true as well with only 8.7 percent of institutions offering no online courses or programs reporting that their faculty accepts the value and legitimacy of online education.

Chief academic officers continue to believe that online students need more discipline to succeed than face-to-face students (68.3 percent). They also agree (44.6 percent) that retaining students is a bigger problem for online courses than it is for face-to-face courses. This is up from a rate of 27.2 percent in 2004. However, the authors are unable to explain why chief academic officers believe this. They further state that the nature of students selecting online courses may be substantially different from face-to-face because of work, family or other obligations. If students drop out for one of these reasons, the authors ask, “does that reflect on the nature of the course, or the nature of the student?” I posit that the answer is more related to the nature of the student but that it also has some bearing on the format of online education. Dropping out is less embarrassing when other students can’t see you packing up and moving out of the dormitory. Student swirling, a term coined by researchers in the early 1990s for students studying at multiple institutions, is much easier to do with online offerings than at more traditional institutions.

Chief academic officers continue to believe that teaching online is harder than teaching face-to-face and that it continues to be a barrier to expanding the number of online offerings and adoption by faculty.

The survey has asked questions about the availability of Open Education Resources (OER) since 2009. This year, four times as many chief academic officers report that they are very aware (26 percent) of OER availability as faculty (5.1 percent). Only 20.1 percent of the academic leaders state that they are unaware of OER versus the vast majority of faculty (65.9 percent). With OER’s potential to reduce the cost of education, it is amazing to me that those resources are not publicized more to faculty.

More than 75 percent of the academic leaders surveyed selected “Cost/Student Indebtedness” as one of the top three factors that will impact higher education’s future. Those selecting cost issues as their top priority exceeded all the other factors by a large margin (38.8 percent total). Leaders of private, nonprofit institutions were the most emphatic about cost issues driving the future with 84.9 percent selecting it as a top-three factor. Given the high percentage of chief academic officers citing cost issues, it is surprising that such a large percentage are not familiar with OER, something with the potential to lower the overall cost of education . Workforce development/gainful employment was the second most frequently cited factor, with 64.4 percent including it in their top-three selections.

Over the years, I have valued the BSRG report as a source for reporting about online student enrollments, trends and perception of online learning by chief academic officers representing different types of institutions. I find it useful sometimes to compare previous reports to the most recent. I believe that the most significant outcome of this year’s report is the decision to utilize the IPEDS-reported data for online enrollment. While the authors admit that IPEDS may report lower numbers than actual and that BSRG’s numbers may have been slightly inflated, I believe that their detailed analysis of the difficulty in reporting, as well as differently-interpreted definitions, will point out helpful changes to IPEDS.

As usual, I have a few changes I would like to see. BSRG has always reported students who enroll in one online course. IPEDS collects its data similarly. I would like to see a second count reflecting students who only attend college online. Eduventures has provided an estimate of that number to its members over the years, but it would be helpful if a broader audience could access that number. With non-traditional students representing the majority of the total, I’d also like to see a report that tallies the number of students enrolled in multiple institutions during the year, including online. The advent of technology and wide acceptance of online programs will only increase opportunities for student swirling, both good and bad. Being able to track it will be important for researchers and institutions, as well as policymakers.