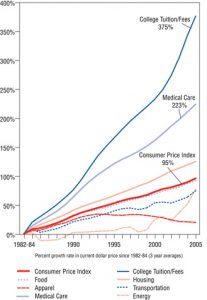 Graphic from Measuring Up 2006, a publication of The National Center for Public Policy and Higher Education, showing the increasing costs of various consumer goods and services in relation to the Consumer Price Index.

As a recipient of financial aid in the 1970’s when I attended Duke and Tulane, I can relate to the continual and ongoing debate about the affordability of college.  I was fortunate to have parents who believed in the benefits of higher education and who told me to “go to the best school that you can get into and we’ll figure out how to pay whatever the financial aid office says that we have to pay.”  Thanks, Mom and Dad.

Fast forward a few decades and it’s difficult to pick up a newspaper or magazine without reading about the issues surrounding the affordability of higher education.  The subject is complex, solutions are complex, and many people have opinions on the issue.  Robert Bliwise writes an article in the July-August issue of Duke Magazine that articulates the view from his vantage point as a professor of public policy.  There are a few highlights that I’ll mention and will certainly resurface in a few ongoing pieces about the financial aid debate.

Bliwise begins with a description of a book published twenty years ago by Charles Clotfelter (Duke ’69) called Buying the Best.  Clotfelter, a public policy professor at Duke, examined the way selective colleges and universities competed for the best students and awarded aid.  Students weren’t price sensitive about an elite education in those days and financial aid was growing faster than any other area of campus spending.  In the article, Clotfelter discusses the issues between need-based aid and merit aid.  Clotfelter defends need-based aid as “a guarantor of the brand,” and states that the value of the institution would be diminished if only the affluent could attend.  I agree, personally and professionally.  Bliwise quotes Duke’s undergraduate admissions director, Christoph Guttentag, as stating that there’s now a competition between the “haves and the have-mores” in demonstrating the social contract balancing the affluent and the needy.  Bliwise provides a list of thirty-six “elite” schools that have created more generous financial-aid packages for families with incomes ranging from $40,000-$100,000 per year.

While the efforts of the “have-mores” are laudable, they don’t go far enough.  One of the biggest reasons we have a problem is that colleges increased their tuitions at a rate much higher than the increase in the average family’s income over the past twenty-five years.  I believe that my tuition and room and board at Duke was approximately $4,000 in 1972-1973.  $4,000 was thirty-two percent of the average family income in America that year which, according to the U.S. Census Bureau was $12,625.  Duke’s tuition, room and board in 2006-2007 was $43,155 which was fifty-five percent of the average family income of $77,315 according to the U.S. Census Bureau.  Using more recent data from the Spellings Commission’s final report, families making a combined income of less than $34,000 could expect to pay forty-one percent of their total family income for a public four-year institution after grant aid in 1992; by 2003, that same group could expect to pay forty-seven percent of their family income after grant aid for the same school.  Had tuitions increased at the same inflation rate as family incomes, perhaps more families would consider higher education or higher education options beyond community colleges as affordable.  I wonder if my parents would provide the same encouragement to me today that they did three decades ago.

Federal aid programs have not kept up with the increases in tuition and increasingly, student aid packages have higher percentages of loans versus grants.  Debt loads of undergraduate students influence their choice of post-baccalaureate careers and also determine whether or not they decide to attend graduate schools.  Bliwise cites a study from the Project on Student Debt, an offshoot of the Institute for College Access and Success, which shows that “debt levels for graduating seniors from private universities increased from $11,356 to $22,125 over the past decade.”  It’s not unusual to hear of students who exit professional graduate schools with debt exceeding $100,000.  Prospective students from lower income families are not considering the higher cost institutions because the tuitions are so high compared to their income levels.  Minorities, particularly Hispanics, are reluctant to borrow to fund their education and their numbers continue to increase as a percentage of the students graduating from our high schools today and into the future.

No wonder then that Richard Kahlenberg, editor of America’s Untapped Resource: Low-Income Students in Higher Education, is cited in the article as “not[ing] that a visitor is 25-times more likely to run into a rich student than a poor student on the nation’s elite campuses.”  Bliwise ends his article with an interview with Tom Mortenson, a senior scholar with the Pell Institute for the Study of Opportunity in Higher Education (and a speaker at the ACE Annual Meeting in 2008).  Mortenson says that “families will be looking for strong signals that they can absorb college costs” and “they’re not likely to feel assured until higher education forges a fuller and more forceful social contract.”

The discussion that Robert Bliwise provides is oriented toward the manner in which Duke and other elite institutions have handled some of the biggest issues in financial aid.  However, there are more than 3,000 colleges and universities that are not considered elite.  Some have patterned their tuition increases to run parallel (as a percent) with the elites.  They cannot afford to provide the “free college” guarantee for certain income levels.  Public institutions are under pressure from increasing costs and reduced funding from their legislatures.  Regardless of the pressures, it’s clear that continued increases in tuition beyond the Consumer Price Index leads to reduced access at a time when America’s competitive place in the world depends on increasing numbers of college graduates.  I don’t think that the federal government can be counted on to fund the difference between affordable tuition and today’s average tuition at a private college or university given the projected budget deficit that our next President and administration will inherit.  We’ll see how the marketplace of higher education adjusts over the next few years.