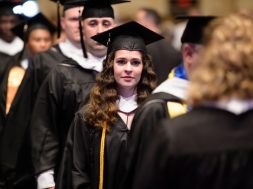 Some College and No Degree

On May 16, 2013, The Atlantic published an article written by Chester Finn, titled “Why Private Schools Are Dying Out.” Finn explores private schools in America and why they’re “dying out.”  While most of the article discusses the situation as it applies to private schools, the author also writes that non-elite, private colleges are also burdened with similar challenges, namely needing to heavily discount tuition in order to attract students.

Many years ago when I was a seventh grader, I was fortunate to be awarded an academic scholarship to attend a private school in Baltimore at nearly no cost to my parents.  That experience at McDonogh School enabled me to go on to two private universities, receiving scholarships and fellowships for my bachelor’s and master’s degrees at Duke and Tulane.  After college, I volunteered and served as an officer of McDonogh’s alumni association.  During my twenties and thirties, I wondered how people could afford to send their children to private school.  Federal student aid doesn’t exist for K-12 private schools, neither does state aid fund them in Maryland.  As I observed McDonogh and other Baltimore area private schools raising their tuition year after year, I found it remarkable that demand appeared to hold steady.  It wasn’t just that the tuition was high, currently exceeding $20,000 per year per student at the Baltimore area independent private schools, but it was the fact that a wage earner would have to earn enough to have after tax cash available to pay tuition, a non-deductible item.  Assuming a combined 45 percent federal and state tax rate, that would require $36,400 in pre-tax earnings for every $20,000 of tuition paid.  Sending more than one child to private school each year would require even more after tax wages and would make certain that a majority of students attending private school came from elite families.

One day, as I discussed private school tuition with a friend of mine whose children attended private school, he pointed out a fact of which I was unaware.  He stated that his parents paid for his children’s private school education since healthcare bills and education tuition were two notable exclusions from federal gift and estate taxes provided the bills were paid directly by the grandparents of the child.  I asked him how many grandparents paid tuition.  His estimate was 30-40 percent of his children’s classmates received tuition payments from their grandparents.  At that point, I realized that eventually, tuition dependent private schools would be in trouble.  The faster tuition increases at rates in excess of wage increases, the more likely it will be that families realize that the difference between sending their children to public school (free, in most states) and private school is either unsustainable, unaffordable, or not justifiable particularly with increased public institutions such as charter schools available.  It is also likely that there are fewer people who can afford private school education as tuitions increase.  Merit scholarships, or tuition discounting similar to practices adopted by private colleges, might work for a while, but as the overall discount approaches 50 percent, the school’s ability to balance income with expenses significantly diminishes.  In addition, higher tuition levels would exclude all but the wealthiest grandparents from taking advantage of the income tax maneuver previously discussed (and that assumes that the exclusion continues in the future).

According to the author of this article (and in line with my thinking), elite schools will continue to do okay since wealthy families have the means to pay for that level of education.  The real question is how many private schools will survive in cities other than the largest and wealthiest metropolitan areas?  The author provides examples of similarities between private secondary schools and private colleges and states that the eventual outcomes are likely to be the same; fewer of each will exist at some point in the future.  Some point to technology as a possible solution but I note that without a positive adjustment to a fixed income business model, the private non-profits risk spending incremental funds to offer online courses in a market with a lot of excess capacity at today’s tuition prices.  I enjoyed my experiences at McDonogh and hope that it is one of the private school survivors in the Baltimore area.   However,  I agree with the author that the private school market will continue to shrink, and school closures and/or mergers are more than likely over the next few years.