The Five-Year Party by Craig Brandon

The Five-Year Party by Craig Brandon 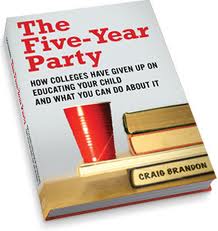 Critics of higher education are numerous these days. Whether it’s politicians or professors, the numbers of defenders of the status quo appear to be dwindling. Most of the books and articles that I’ve read recently have been written by current or retired professors whose audience is either higher education leadership or public policy leaders. Recently, a publisher contacted me and asked me if I would review a copy of the newly published book entitled The Five-Year Party: How Colleges Have Given Up on Educating Your Child and What You Can Do About It.

Author Craig Brandon was a former journalism professor at a Northeastern party school (Keene State College in New Hampshire) as well as an education reporter. His book combines stories of his personal experiences as a professor along with complementary evidence about other institutions or the higher education industry in general. His writing is hard-hitting, designed to create an action or a reaction from the reader, depending on their point of view.

Brandon’s intro provides the overview for the theme throughout the book which is (in my words) “colleges have sold out and don’t care if students learn as long as they pay tuition.” Additionally, Brandon cites the ever increasing administrative payrolls as well as the luxury “student centers, water parks, hot tubs, workout centers, and climbing walls” as bait to attract new students. He writes that many students expect diplomas for their cash and don’t expect to have to learn.

I am more accustomed to reading about higher education as it relates to adult students, community colleges, and online education. Brandon’s book is about the higher ed sector that recruits traditional students who have recently graduated from high school and who are leaving the cocoon of their homes for life at college and away from home. He criticizes administrators for shifting the focus from educating a student to keeping them as a student by easing up on the academic rigor and allowing a party life to flourish at most campuses. Grade inflation has reached the point, according to Brandon, that 90 percent of all college students receive either an A or a B. Administrators have allowed students to drop classes more easily meaning that the school keeps the tuition even though the student earns no credit for it. With the average student taking six years to complete a baccalaureate degree, Brandon states that most colleges are elated to receive a 50 percent increase in tuition revenue due to the student’s inattention to graduating on time. Furthermore, Brandon states that the lower academic standards free up time for students to socialize dozens of hours a week instead of studying. He cites a study that one fourth of college freshmen drop out by the end of their first year, not because of poor grades but because they couldn’t remain healthy while partying all night on a regular basis.

If I were a parent contemplating sending my child or children off to college in a few years, Brandon’s book would be a worthwhile read. He devotes an entire chapter to the topic of college secrecy about the true number of crimes on campus and another one to the bleak lives of party school graduates when the loans have to be repaid and they’re working in jobs that will not allow them to repay those loans without severe hardships. The data in these chapters should provide a basis for asking sound questions of a college’s admissions staff as well as of your son or daughter after they are enrolled in a college of their choice. From an institutional advocacy perspective, I might have to question Brandon’s statement that only 10 percent of his students were serious learners. Nonetheless, his issues are well-worth considering.

Given that parents of college students seldom directly influence higher education policy, it is interesting that Brandon included seven policy recommendations in his final chapter about how parents can “cancel the five-year party.” I am not aware of parents currently lobbying Congress about anything related to higher education, but perhaps The Five-Year Party can be useful as a rallying tool for future marches on the Hill. The seven recommendations made by Brandon are: (1) Cap college tuition increases at the inflation rate (Brandon cites the cost of college tuition increasing at a rate more than double the consumer income increases over the past two decades), (2) Require students who need remediation to get it before college (Brandon correctly states that using colleges to teach high school algebra, reading and grammar is a waste of time and money), (3) Repeal FERPA and replace it with legislation that encourages parents to participate in their children’s college educations (parents who pay the tuition bills should have the right to see grades and disciplinary records of their children, per Brandon), (4) Get colleges out of the criminal justice business (since they hide crimes to protect their reputation), (5) Require that colleges give parents honest information (the list of stats that Brandon encourages all colleges to disclose would “put the party schools out of business”), (6) Reform the process by which colleges and universities are accredited (accreditors don’t ask if students actually learn), and (7) Require college seniors to pass a value-added test before receiving a diploma (Brandon’s idea is that the test wouldn’t need to show how much a student learned but rather guarantee that the student had learned the minimum).

Brandon’s policy recommendations are topics that are often the subject of books by other academics and policy organizations. While they are merely rushed through as part of the final chapter advising parents about how to avoid the party schools, he has taken the higher ed policy issues espoused by others and summarized them in a parent-friendly format. His recommendation for FERPA reform is probably the most passionate advocacy that I’ve read. Journalists are trained to keep the reader’s attention on the story and Brandon succeeds in keeping the story on track and in front of the reader’s mind at all times. Writing the book from the perspective of educating parents about higher education weaknesses was a great idea. While some in higher education (particularly the “administrators”) won’t agree with all of Brandon’s points, this is another excellent wake up call to some of the changes that colleges and universities need to consider.