Home Graduation Tapping Innovation in Scholarship, Leadership and the Workplace 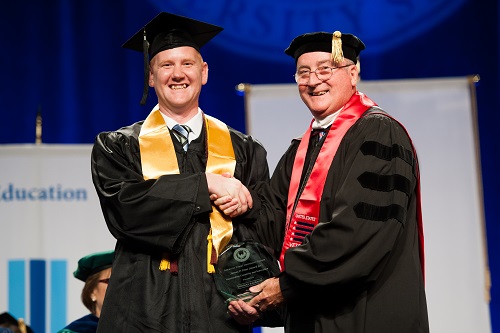 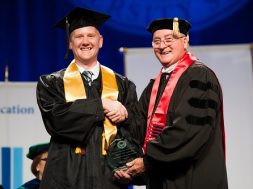 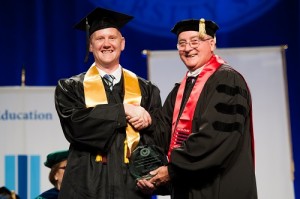 In late April, I was informed that American Public University (APU) planned to present me with one of its James P. Etter Awards for Creativity and Innovation during its recent 2014 Commencement. I had no idea that I was even nominated. I did not realize at the time the magnitude of what this would mean for me or my career, or that I was the first student to receive the prestigious award.

I was selected based mainly on my contributions to the National Society of Collegiate Scholars (NSCS), an honor society that exists to recognize and elevate high achievers. It stands on three pillars—scholarship, leadership and service. I became the chapter president shortly after it was chartered and took the chapter from its development stage into an engagement phase, focusing on student interaction.. We ultimately set the bar for future chapter development and growth.

Trying to engage chapter members living around the world while focusing on service, is a little different in the virtual world. So it’s my mission to find innovative ways to succeed.

Our first project was a book drive for USO’s United Through Reading Military Program (PDF), which enables deployed troops to read bedtime books to their children from afar using online technology. Initially, we collected more than 200 books to send to our troops, but the logistics were complicated. So, we suggested that our members use Amazon and Walmart’s Site to Store service, both of which offer free shipping. We also raised money for USO, Feeding America, NSCS Scholarship Fund and many more projects.

I believe there is never a problem without a solution. Some solutions are harder to see through virtual pathways, but they are there. This is where creativity and innovation intersect—and where we’re laying the groundwork for future chapter leaders to follow.

The other reason why I was nominated for this award was my job with Walmart in the Store Planning Division, where I work to set up new stores, remodel old stores, and lead other projects that add value to the company. This job often requires creative problem solving to ensure the safety of employees and customers. No project goes perfectly, but I strive to make the decisions that are best for the business.

Receiving the Etter award, and realizing the magnitude and respect that goes with it, is something that I have yet to fully grasp. I did a video interview at my APU graduation; a brief phone interview with CNN; and provided input for the August edition of Walmart World Magazine. All of these opportunities, combined with receiving this award at commencement, add up to an amazing year that I will always cherish.

Thomas Rasbach works for Walmart Stores Inc. as a Store Planning Field Project Supervisor. He received his bachelor’s degree in business administration from American Public University. He is an active member of the National Society of Collegiate Scholars (NSCS) and serves as a student ambassador.