Dialogue Regarding The Long Tail

Dialogue Regarding The Long Tail 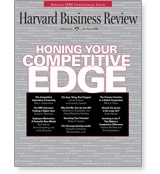 Michael Rabjohns sent me a note informing me of an article in the July Harvard Business Review written by Anita Elberse.  Elberse is an associate professor of business administration in the marketing department at Harvard Business School.  Her article leads off with a portrayal of Grand Central Publishing, a company that lists 275-300 books each year in its catalog and identifies two (my emphasis) for which it will pull out all the stops in marketing.  Grand Central pursues a blockbuster strategy for which Elberse gives credit to economists Robert Frank and Phillip Cook (an economist at my alma mater, Duke University) for endorsing in their 1995 book, The Winner-Take-All Society.

Elberse states that this strategy conflicts with the long tail theory espoused by Chris Anderson.  She reviewed sales data from Rhapsody (used by Anderson) and Quickflix (an Australian DVD rental company).  She states that the data shows that seldom rented DVD’s shift into the tail and their usage doubles over a five year period of time.  However, the number of DVD’s with no usage quadruples over the same period of time.  She states that the tail is becoming longer and flatter, not bulkier.  During the same period of time, the number of titles in the top 10% dropped by 50% which demonstrates that the “winner-take-all” strategy is winning.  Elberse’s data for music tracks confirms a similar trend where the tail lengthens, but grows flatter and fewer tracks are in the top 10%.

Elberse concludes her article with recommendations to producers and retailers.  The only finding where she directly supports the long tail is in her recommendation to retailers stating that if the goal is to cater to the heaviest volume customers, include a diverse assortment of titles since her research indicates that the buyers of the obscure titles tend to be the heaviest users of the online services.

Anderson doesn’t dispute Elberse’s research; in fact, he praises it.  But he claims that Elberse’s portrayal of the “head” of the tail at 32% and the tail at 68% confirms his theory about the size of the tail.  Elberse responds to Anderson’s comments by stating that he is inconsistent about the definition of size of the tail and head and that consistency in definition would verify her findings that the tail is bigger but flatter and that analysis has repercussions for producers and retailers in the strategy that they should pursue.

All in all, this is a great debate and I thank a reader for pointing this out to me.  I’m sure the dialogue will continue.  I think Anderson and Elberse are accurate in their claims and I like Elberse’s caution to certain businesses, particularly producers.