Home Current Events Commencement Weekend 2020: Reflecting on the ‘Favorite Weekend of the Year’ at Our University 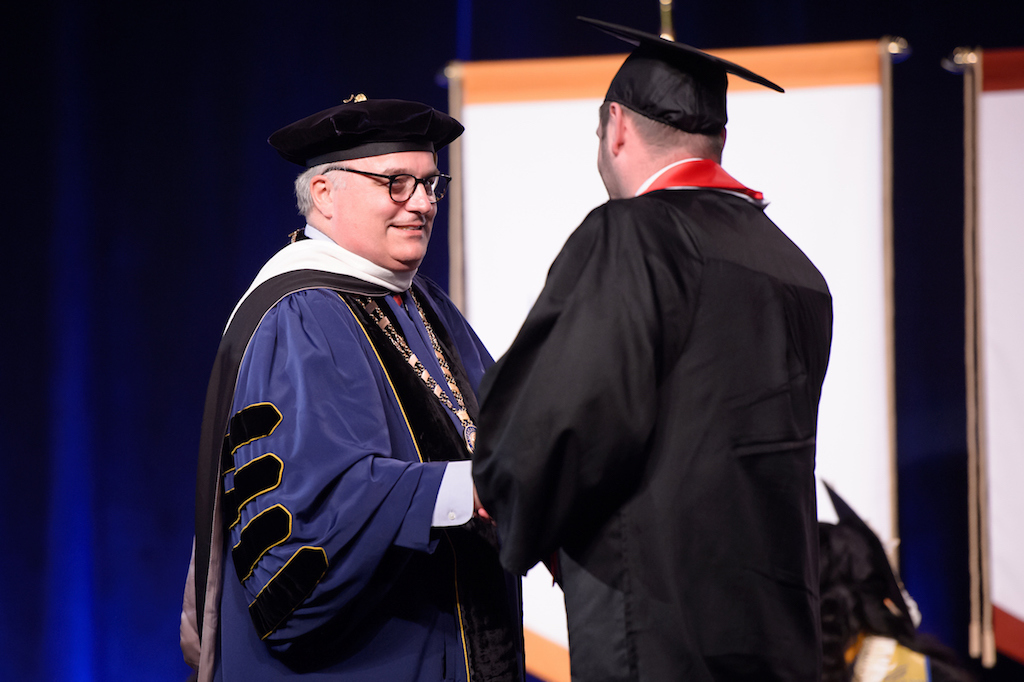 In 2004, I attended my first AMU/APU graduation. We held the graduation in a ballroom at the Army and Navy Club in Washington, DC. That year, approximately 500 students graduated from our undergraduate and graduate programs. I recall that about 40 were able to attend graduation.

Because of the low number of attendees, we offered each graduate the option of going to the podium and saying a few words about their educational experience with us. The stories were unique to each person, and at the same time similar in the sense of the obstacles that each of them overcame while working or raising a family in order to earn a degree while studying online. It was my first opportunity to meet recent graduates and hear their inspirational stories firsthand.

As AMU and APU grew, our number of graduates grew, as did those who chose to attend our annual Commencement ceremonies. We moved from the Army and Navy Club to the Army Navy Country Club, Westfields Marriott, Constitution Hall, and for the past eight years, the Gaylord National Resort & Convention Center.

Over most of those years, we were able to hold a single Commencement ceremony for all graduates. Because of the rising numbers of graduates attending in person, we have split our ceremonies between graduate and undergraduate over the past four years.

Our Commencement ceremony has become “Commencement weekend,” with events for alumni and their families, faculty and staff, and other guests. It has become my favorite weekend of the year.

Last September, I announced my retirement from the APUS presidency, effective June 30, 2020. While the decision was not easy, I had already eased past the traditional retirement age of 65 and served the university for 17 years.

I thought it was time to hand over the leadership mantle to someone else. While I knew that there were a number of tasks that I had to complete over the next few months, the one that shone brightly as an honor and not a task was presiding over the Commencement ceremonies in May.

A few months later, the coronavirus pandemic reached America. We reached the decision in early March that we would suspend university-related travel and have our leadership team, faculty, and staff who occupied our campus buildings in Charles Town, WV, and Manassas, VA, work from home.

At the time, we were not yet ready to concede that we would have to cancel our Commencement weekend activities scheduled for May 15 and 16. Once Maryland’s governor issued his executive order closing non-essential activities in the state until May 13 and banning groups of more than 10 people, we knew that too many people were involved to risk waiting for the ban to be lifted.

On March 20, I sent a letter to all students who were celebrating their graduation to inform them that we had cancelled this year’s Commencement services. However, we invited all of them to attend next year’s ceremonies, and we have worked to schedule a virtual ceremony on the same date, May 16.

Since this is our first virtual Commencement, it’s something new to me as well and I hope you enjoy it should you decide to attend. At the same time, my memories are filled with the joys of meeting many graduates and their families over the years and hearing about their educational journey.

The paths are all unique but united by one common theme—a successful completion. I will miss the friendly conversations and greetings, but most of all, I’ll miss celebrating in person and shaking every graduate’s hand as they walk across the stage.

Congratulations to all of the members of the Class of 2020! Thank you for choosing us to complete your educational journey!

tags: commencement Commencement 2020 original virtual commencement
previous How Should We Measure Financial Solvency for Colleges and Universities?
next Life in the Office Will Change – Are You Ready to Return?

Building Back American Job Training in the Post-COVID Era