Home Book Reviews College: What It Was, Is, and Should Be
Book Reviews
June 22, 2012 Wally Boston 0

College: What It Was, Is, and Should Be

College: What It Was, Is, and Should Be 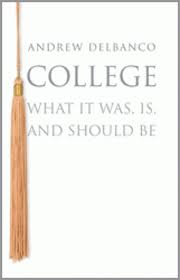 Judging from Andrew Delbanco’s experience as a professor of Humanities at Columbia University, I thought his new book, College: What It Was, Is, and Should Be, would provide the standard defense of a liberal arts education. While he strongly advocates the merits of critical thinking utilizing a broad knowledge of history and philosophy, it’s not the dominant theme of his arguments. One sentence in his introduction, “it is a nightmare society that affords the chance to learn and grow only to the wealthy, brilliant, or lucky few,” foreshadows the book’s conclusion.

In his opening chapter, Professor Delbanco talks about the three answers to the question “what is college for?” The first answer is that it is good economically for the individual and the nation. While he agrees with this, he also laments the fact that financial means impact the chances that a person will graduate from college at all. The author points to how Americans look at college degrees as a ticket to economic and social mobility and states that we can ill afford having colleges become “a system for replicating inherited wealth.” Answer number two is that an educated population enables a democracy to flourish. Of course, it’s also the type of education that matters and Delbanco refers to courses of study that provide students with the ideas of Western culture through a closer focus to liberal arts. Answer number three is that you want a student to learn about the past in order to be able to think critically about the present and the future.

The book’s next two chapters, “Origins” and “From College to University,” provide the reader with historical perspectives of the evolution of college from its beginnings in the 12th century in Europe to the present in the United States. A key point from Delbanco’s perspective is that in recent years, the humanities have marginalized themselves as a valuable part of a research university by repudiating scientists and objectivity in research. That repudiation at the university level trickled down to colleges.

In the chapter entitled “Who Went? Who Goes? Who Pays?,” Professor Delbanco discusses the stalled expansion of the opportunity to attend college, a phenomenon largely caused by the shrinkage of state funding for public institutions as well as the increased recruitment of out-of-state students who pay higher tuition than in-state students. Increased state funding of financial aid based on merit is also mentioned as a contributor to the reduced opportunity for students from low income families. The author describes the quest for improving college rankings as having led to a narrowing of the educational mission at quite a few colleges and universities. He writes that the admissions practices at institutions that are selective or intending to increase their selectivity are “heavily weighted in favor of students from families with means.” Delbanco states that this is a problem in that the continuing bifurcation of Americans with and without wealth will lead to the two sides not knowing much about each other if their children do not participate in the same college community of learners.

I liked the author’s discussion about the impact of meritocracy on society. Meritocracy, a word coined approximately 50 years ago according to Professor Delbanco, describes people who get to the top by being “intelligent, hardworking, and ambitious.” The author poses a rhetorical question which paraphrased is “can people who have worked their way to the top appropriately govern when they believe that they got rich because they earned it and they believe that others are poor because they deserve it?” Delbanco also discusses how the highest ranked colleges have gotten too close to the world of money which influences their culture. College presidents with seven figure salaries who sit on the boards of public companies providing additional remuneration are not uncommon. Superstar tenured professors are also able to dictate terms of teaching loads, business ventures, etc. The recruiting war for the best students has led to many campuses borrowing money to build student activity centers and other facilities resembling those at a luxury spa or resort in hopes of attracting a certain student demographic. Delbanco believes that there is a sense of drift in college. Students avoided subjects like literature and the arts before the 2008 recession and continue to avoid them. Grade inflation is rampant as is student cheating. Colleges have disconnected from their role of providing students with a sense of responsibility to those who are less fortunate.

In his conclusion, Delbanco states that keeping colleges ethnically and socioeconomically diverse is getting tougher and tougher due to continually increasing tuitions and fees. He recommends that colleges provide better remedial help to their own students as well as collaborate with high schools to improve students’ college readiness. While Delbanco is skeptical about technology, he states that everyone needs to recognize the Internet’s potential for leveling the distance between those with money and those without. He recommends that doctoral programs obligate themselves to prepare graduates for teaching as well as research. He reiterates that college cannot be only for the wealthy. He also states that students studying specialist topics like accounting and hotel management are capable of answering the bigger questions of life such as those that were once the centerpiece of a college education (the liberal arts education). Despite its problems, Delbanco believes college needs to be preserved as a community and a place where students learn that self interest should not displace the concerns for others.

I liked Andrew Delbanco’s book. While he makes a number of good points, those related to the rise of meritocracy specifically have impacted my line of thinking about college, public service, public policy, and politics. I would highly recommend this book to members of the meritocracy.

tags: Andrew Delbanco College: What It Was Is and Should Be Columbia University meritocracy
previous Completing College: Rethinking Institutional Action
next The Click Moment: Seizing Opportunity in an Unpredictable World