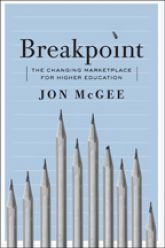 When I read that author Jon McGee had spent the last 14 years as a cabinet officer at two liberal arts colleges, I thought it was an interesting parallel to my nearly equivalent time served at a wholly online institution. While we serve a different clientele (his students are traditional, residential, full-time, 18-22 year-olds and ours are working adults studying part-time online), our viewpoints are nearly identical:  higher education faces major challenges, and institutions need to anticipate and prepare for change, rather than simply react to it.

McGee states that today’s higher education landscape can be framed around five key issues: accessibility, affordability, accountability, sustainability, and differentiation.  While none of these are new ideas, he notes that they are major challenges because they operate both independently and interdependently.  Few colleges or universities control their own destiny.  Markets matter and three related issues dominate the public policy discussion about higher education: price, affordability, and value.  These issues correlate closely with three issues that dominate institutional planning and decision-making: mission, market, and management.

The evolution of college from a luxury to a necessity over the past 50 years has changed the outlook of American parents, who expect their children to attend college. With that expectation, college is viewed less as a transformational experience than as a transactional one.  The commercialization of college impacts all participants in the academy: administration, faculty, and students.

The economic changes of 2008 created a major inflection point in higher education that will influence and shape its mission, market and management opportunities for many years. Three disruptives forces emerged at that time and continue to intensify.  Demographic, economic, and values disruption have intensified the challenges that institutions face and few institutions will escape unharmed as these forces reshape higher education.  It’s no surprise when the author states that the marketplace for traditional-aged students will become more congested and competitive, and less predictable.

Demographically, Americans have moved west and south. Today, 60 percent of Americans live in the west or south.  Move than 25 percent of all Americans live in three states: California, Texas, and Florida.  Despite the overall migration of Americans, college attendance patterns related to student enrollments close to home are unchanged since 1970.  Fewer than 40 percent of all new students attending college in 2012 travelled more than 100 miles to attend school, while less than one in seven traveled more than 500 miles to do so.

Meanwhile, diversity in America continues to increase and is likely long-term and permanent. By 2023, graduates of color will comprise 50 percent of all high school graduates in America.  Colleges unable to attract and graduate students of color will be at risk of missing their enrollment goals.  Additionally, African-American and Hispanic families are less likely to be able to pay for college than white and Asian families.  New financial aid investments will be required as the demographics of college students change.

Everyone is aware that college tuition has increased at a rate greater than that of family incomes. This has impacted the bottom three quintiles of the population more than the top earners.  We are a nation of spenders, not savers, and for those families whose savings were tied up in their homes, home values have declined substantially as well since 2007.  With family incomes and assets decreasing, it is no surprise that student debt has increased to all-time highs since 2001, essentially doubling the amount of loans held per college graduate.

McGee notes in his chapter on cultural disruption, “The values that define the culture of many institutions increasingly are out of sync with the evolving cultural values and expectations of the marketplace.” Colleges collectively behave like other commodity-producing industries.  The college experience is increasingly “less location-bound as it becomes available digitally to anyone, anywhere, and at any time.” He does not believe that the average college communicates the distinctiveness of its programs to the parents and students who view its handbooks or visit its campus.  Because of this inability to effectively communicate value, colleges induce demand by manipulating price.

When price becomes the commodity, McGee stresses that quality and experience will often suffer. He believes that colleges have failed to properly maintain a value proposition.  Many colleges tout the college experience as the value when it’s clearly the credential that matters, not where or how it’s earned.  The rising cost of the traditional college experience will fuel the continued growth of online education.

There are three broad trends that McGee predicts will require the attention of college leaders over the next decade or two:

These trends will require college leaders to reimagine the marketplace.   McGee provides a guide for colleges to think more from the perspective of how to meet the students’ needs, adapting and differentiating their college from others.  Value must be expressed along the lines of intellectual, personal, and career development.  In the new marketplace, “demonstrated value is king.”  Market development will require more partnerships, consortia, and public policy leadership.  Price strategy is both a financial and a value exercise and he warns that “markets don’t generally fail, strategies do.”

Shortly after I finished the book and before I wrote this review, I saw that Inside Higher Education’s Kellie Woodhouse interviewed Mr. McGee. His perspective as a higher education insider responsible for planning makes him much more credible than most. His direct comments about the need for lower net pricing should trigger alarm bells at institutions planning to continue to pass through tuition increases to a rapidly changing demographic.  The trick for many colleges will be reimagining a business model that adapts to the new marketplace before suffering irreparable financial harm.

tags: Breakpoint higher education Jon McGee
previous The Future of the Professions: How Technology Will Transform the Work of Human Experts
next Another Observation About Tech Impact On Middle Class Jobs