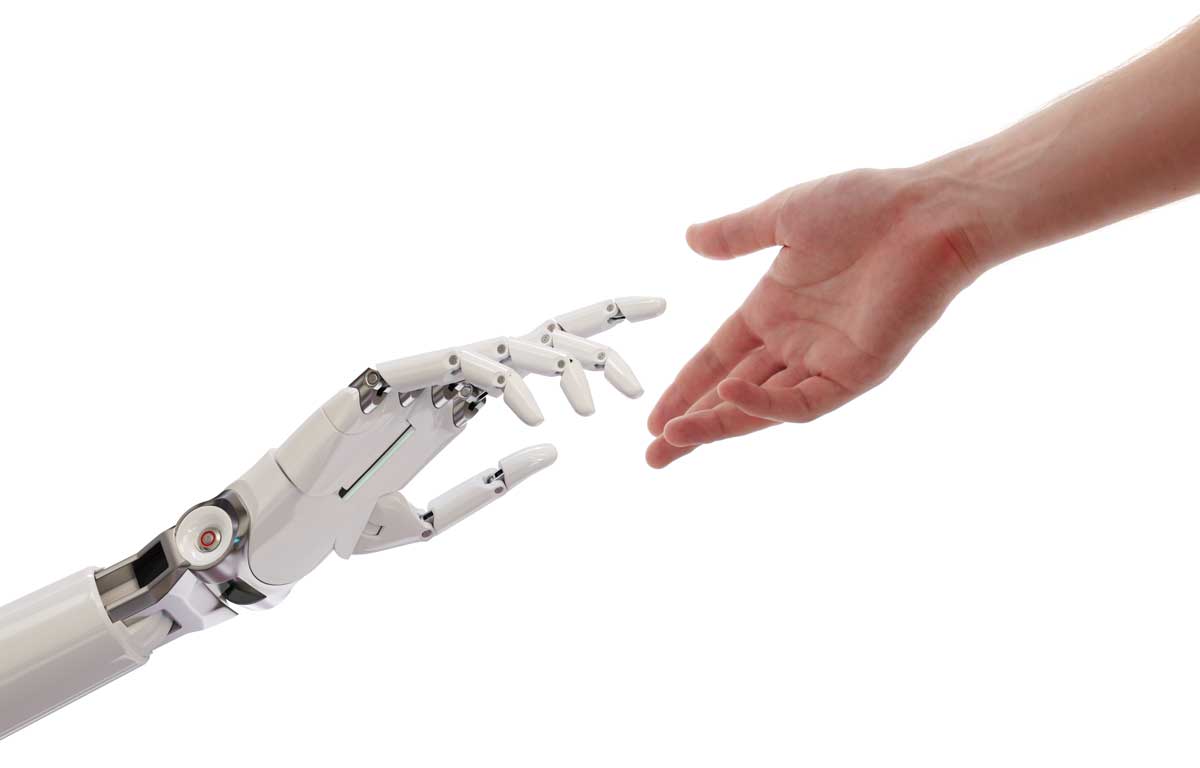 In my recent article discussing the Daedalus issue on Artificial Intelligence and Society, I mentioned that the issue’s editors had organized the papers submitted in several different categories. The Michael Spence paper that I discussed was part of On the economy & future of work category. I selected that category for discussion since one of the many purposes of education, and arguably the primary purpose, is to prepare our citizens for work.

One of the other papers in that category was written by Erik Brynjolfsson, a Stanford AI professor known for several books including The Second Machine Age. I reviewed The Second Machine Age in 2014 and another of his books, Machine Platform Crowd, in 2017. I decided to review his paper, The Turing Trap: The Promise & Peril of Human-Like Artificial Intelligence, to see if his thinking has shifted since his 2014 book.

The introduction for Brynjolfsson’s paper discusses the famous test to determine whether a machine was intelligent proposed by British scientist Alan Turing in 1950. That challenge has been a direct or indirect goal of researchers, engineers, and entrepreneurs ever since. For all the inspirational stories about robots that have been written over many decades, Brynjolfsson notes that our generation is the first to deploy real robots in large numbers.

Early robots were used to perform a single, simple test, while more recently, dozens of companies are working on robots that are more human-like than ever before thanks to human-like artificial intelligence (HLAI). Brynjolfsson notes that AI systems are crossing thresholds never crossed before. An increasing number of tasks such as image and speech recognition are matching human abilities in areas like medical diagnosis, inventory management, product recommendation, and autonomous vehicles.

In the next decade, Brynjolfsson writes that machine intelligence will become increasingly more powerful and pervasive. We can expect record wealth creation as a result. Because of these changes, his essay focuses on the ways that HLAI could realign economic and political power.

Like Mr. Spence’s writing in his essay, Mr. Brynjolfsson notes that AI can be used to augment human labor or automate it. When AI augments human capabilities, humans and machines are complements. When AI replicates and automates human capabilities, workers lose economic and political power. Entrepreneurs and executives who have access to machines that replicate humans will often replace humans with machines in those tasks.

There’s no doubt that automation increases productivity. As more tasks are automated, a fully automated economy could be structured to redistribute the benefits from production widely to include those people who are no longer required to participate in processes for value creation. However, the incomes of those not participating would be dependent on the decisions of those in control of the technology.

Building machines utilizing HLAI provides a path to unprecedented wealth for those who utilize them to automate versus augment. That creates the potential for creating a Turing Trap, Brynjolfsson’s term for the equilibrium between fewer people with more wealth and more people with less wealth. Those in power stay in power and those without power have no way to improve their outcomes. The grand challenge of the upcoming decades will be to reap the benefits of AI without creating a Turing Trap.

The good news, according to Mr. Brynjolfsson, is that automation and augmentation can boost labor productivity. As productivity increases, so do average incomes and living standards. The bad news is that no economic law ensures everyone will share this growing pie. When AI automates human labor, the marginal value of workers’ contributions is reduced. When AI augments human labor, more of the gains go to human workers.

Augmentation due to technology has been more important than automation over the past 200 years. An important metric to track is the economic value of an hour of human labor. Its market price measured by median wages has grown more than 10 times since 1820. Companies are willing to pay more for a worker who can operate a bulldozer than a worker who can only work with a shovel or his bare hands.

Mr. Brynjolfsson notes that in recent years, not only is the labor share of the economy decreasing but some groups of workers are falling further behind. He cites the fact that over the past four decades, the numbers of millionaires and billionaires grew while the average wages for Americans with a high school education fell. Changes in technology created that change in equilibrium. These changes have increased the fear that AI will lead to a growing class of unemployable people.

Innovations and externalities are centrally important to the economic effects of AI, writes Mr. Brynjolfsson. AI is not the only innovation since it triggers many complementary innovations from new products to new systems. The effects of AI create many externalities. When workers lose their jobs, the costs go beyond unemployment compensation but can increase alcoholism, crime, and opioid abuse.

There are three groups of people – technologists, business leaders, and policy-makers – who find automation alluring. Their relative positions of power amplify the risks of the Turing Trap becoming a reality. 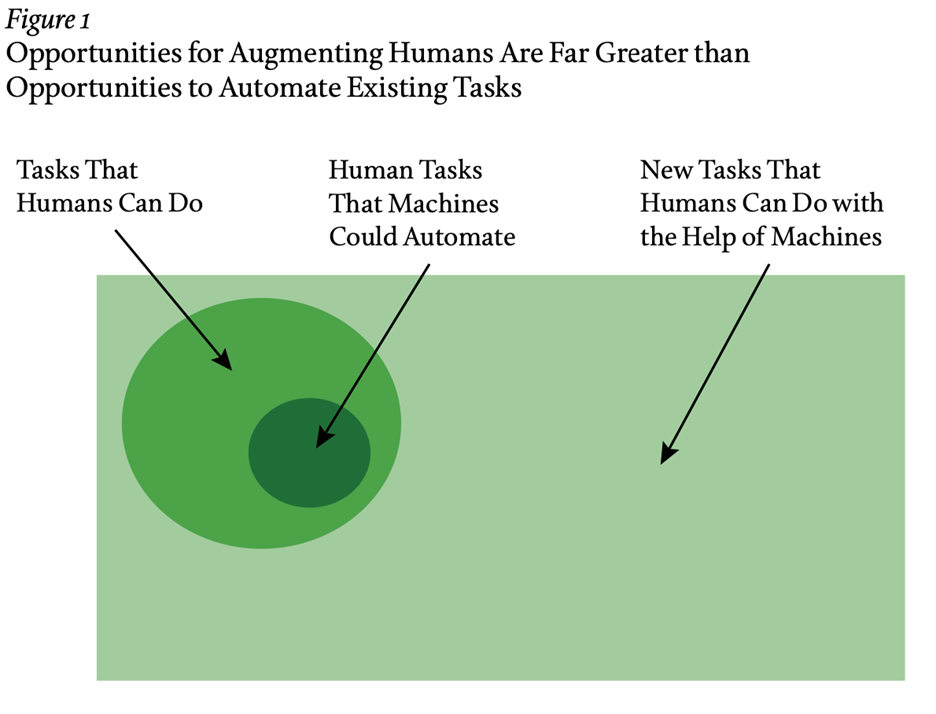 Brynjolfsson utilizes the history of automation and economics to provide a reason why the figure above is more likely than not a relatively accurate portrayal of the value of augmentation over automation.  As earlier noted, most of the past two centuries technical innovations have led to augmentation instead of automation. As a result, what workers currently make for consumers are items that would have never been envisioned had we simply automated what we were making decades ago. Fully 60 percent of people are now employed in occupations that did not exist in 1940.

Fully automating jobs is very difficult. While AI may be able to read mammograms better than a radiologist, it’s not very good at the other 26 tasks associated with the job. Mr. Brynjolfsson refers to work in which Tom Mitchell, Daniel Rock, and he analyzed 950 distinct occupations on the suitability for machine learning. They found that none existed in which machine learning could do 100 percent of the tasks.

Policymakers have provided more incentives for automation than augmentation over the years. The U.S. tax code encourages capital investment over investment in labor. For example, writes Mr. Brynjolfsson, there are two firms that use AI to create $1 billion in profits. One company does this by augmenting and employing 1,000 workers. That firm will owe corporate and payroll taxes and its employees will pay income taxes, payroll taxes, and other taxes. If the other company makes its money with no employees, the government collects the same corporate taxes, but no payroll taxes and no taxes paid by workers.

A tax code that treats income that uses labor less favorably than income derived from capital will favor automation over augmentation. Treating both business models equally would lead to more balanced incentives (WEB note: the growth of non-profit businesses and state and local governments over for-profit businesses is not discussed but would seem to work against our economic expansion when you look at the long-term impacts of tax preferences and how they benefit the economy). Brynjolffson writes that a broad-based set of incentives can “gently nudge” technologists and managers toward augmentation on the margin instead of automation.

The growing use of AI indicates a greater need for worker training or retraining and upskilling. For each dollar spent on technology, companies may have to spend nine dollars on retraining. However, companies that spend the money on training may not reap the benefits since those workers are free to take their skills to competitors. Since workers are often cash and credit constrained, Mr. Brynjolfsson writes that government policy should provide education and training directly or provide incentives for corporate training that offset the externalities created by labor mobility.

Mr. Brynjolfsson concludes by writing that the future is not pre-ordained and that “we” control the extent to which AI automates or augments human work. He cautions policymakers that the premises that Free Trade would lead to a beneficial equilibrium did not come true. Those who initially benefitted were unwilling to give up their position to those countries that were unable to benefit from free trade.

The solution is to eliminate or reverse the excess incentives for automation over augmentation. Augmentation through AI can create a prosperous society that offers political inclusion for everyone.

When I reviewed The Second Machine Age, I noted that Mr. Brynjolfsson and his co-author, Mr. McAfee, were optimistic that everyone would benefit. I added that I thought that entrepreneurs and nimble corporations would adopt the technology quicker than policymakers could react legislatively. My conclusion was that I hoped that policymakers would read The Second Machine Age to understand the coming change in technology accelerated by AI. Given that there seem to be no policymakers on either side majorly concerned about AI at the present time, I hope something positive occurs to trigger a serious bipartisan review that augmentation needs to be incentivized over automation before it’s too late. We cannot afford the societal consequences if we allow a Turing Trap to be created.