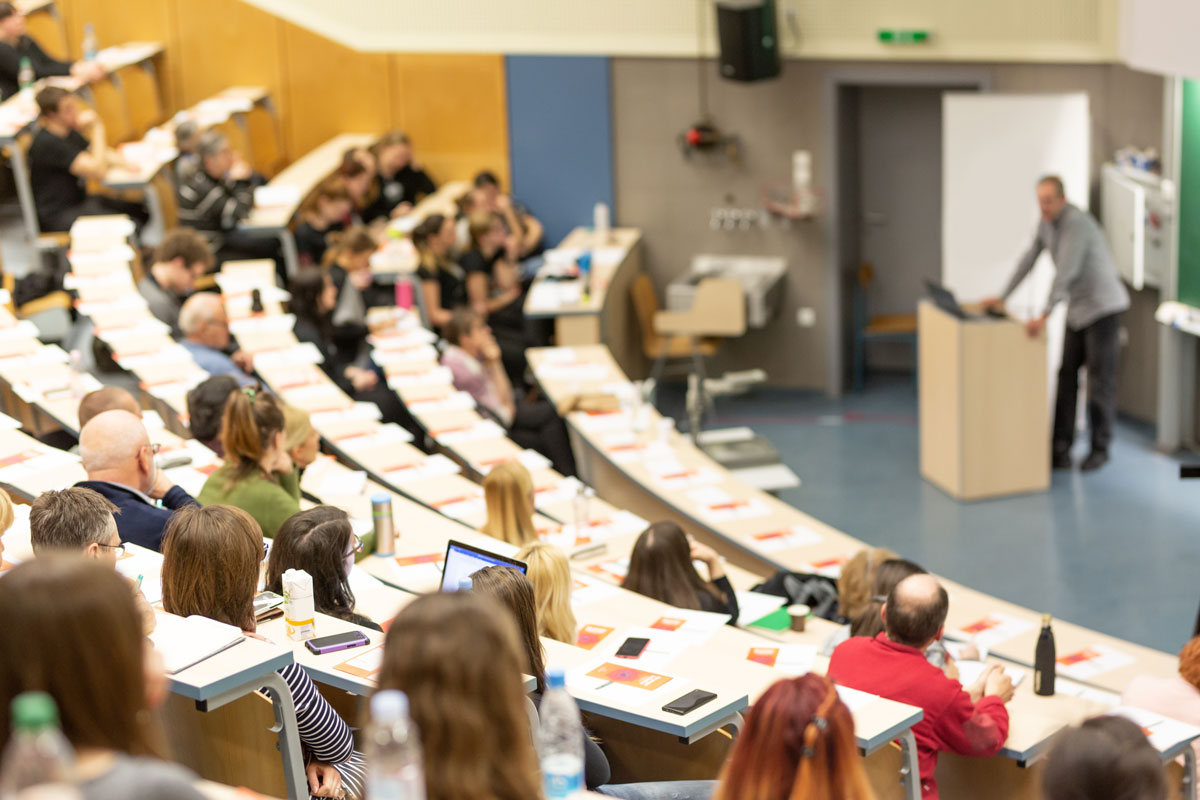 Part 4 ended with a discussion about the percentage of students enrolled in online classes in the fall of 2018 as well as the concentration of those enrollments in a small number of institutions.

The college rankings created an arms race among the nation’s elite colleges and universities but also enabled the practice of tuition discounting which expanded so rapidly that it’s an expectation by the families of college freshmen that their son or daughter will receive a substantial merit scholarship as an incentive to attend college. In some cases, the tuition discount percentage has increased to the point that the college’s finances are in jeopardy.

The affordability of public colleges and universities led to increased enrollments in this sector. At the same time, most states have not been able to provide the same subsidy per student to each college that they did before the 2008 pandemic. The lack of innovation in this sector has led to enrollment strategies of increasing the percentage of out-of-state and foreign students who would pay a higher tuition as well as not be eligible for federal aid programs (foreign students only).

As if these disruptions were not challenging enough, the federal government has been slowly moving toward greater accountabilities for all colleges and universities (e.g., The College Scorecard), while Democratic administrations have tried to turn the screws on the for-profit sector attributing the misdeeds of a few bad actors to the entire group.

Ultimately, the expectations of prospective students and their families are that a college degree will lead to a job that pays well enough to provide a return on the investment of their time and money. Unfortunately, that has not played out well recently. Employers are expressing their disappointment in the preparedness of college graduates, and unprepared college graduates are expressing their disappointment in their ability to obtain a job utilizing the knowledge that they learned in college.

Lumina Foundation President Jamie Merisotis’s 2020 book, Human Work in the Era of Smart Machines, provides an overview to the conundrum between the rapidly changing workplace due to advances in technology and the need for educators to partner with employers. Mr. Merisotis argues that everyone will see their jobs change in some way by technology and will need additional learning to take advantages of the opportunity of work that will be created.

Half of all jobs in the U.S. are now classified as uniquely human, an increase from 30 percent just a few years ago. Mr. Merisotis predicts that 80 percent of all jobs will be classified as uniquely human over the next 10 years. Mr. Merisotis writes that there is no way we can prepare people for work using old models of learning based on mastery of knowledge. There are three problems that need to be overcome to prepare our workers for the future. The first problem is that more people need higher level learning but few of today’s colleges have adapted their systems to accommodate the profiles of today’s learners who are older, work full-time, and go to school part-time. The second problem is that we don’t do a good job developing skills that human work requires. You don’t learn these skills sitting passively in a lecture hall. The third problem is that we don’t know what graduates have learned. We need to define clear frameworks for knowledge and skills so that employers, educators, and student workers are speaking the same language about skills.

Another book published shortly after Mr. Merisotis’ was Michelle R. Weise’s Long Life Learning. Dr. Weise’s premise is that increasing lifespans will lead to a 60-year work-life. A new learning ecosystem must be developed by employers and educators and must be navigable, supportive, targeted, integrated, and transparent. To support that ecosystem, we need a more robust data infrastructure with a transparent and common definitions of credentials, skills, and learning,

Former Columbia Teachers’ College dean, Dr. Arthur Levine and Wharton’s Scott Van Pelt argued in their 2021 book, The Great Upheaval that traditional higher ed was built for the industrial economy which was overturned by the knowledge economy two decades ago. Industrial societies are built on common processes, and knowledge societies are built on common outcomes. The three biggest drivers of change in the future will be demographics, economy, and technology. Online education benefits from all technologies. Online is a better mode for the upskilling and reskilling of adult workers. Traditional colleges need to evolve quickly or find themselves on the sidelines like the television, movie, and news industries.

Most of the discussion about the crisis in higher education has revolved around the undergraduate degree, its return on investment and relevance to students and employers. However, colleges and universities have not been shy about charging high tuitions for graduate degrees. In a series of articles published in the summer of 2021, the Wall Street Journal called attention to recently published College Scorecard data illustrating high student loan balances and low incomes for many alums of graduate programs. While a shakeout is not likely in high demand programs like medical professional degrees, savvy students should utilize these tools before attending an expensive graduate program that may provide little return compared to the tuition and other costs of attendance (not counting the time to complete the degrees).

In 2022, the average institutional tuition discount rate hit an all-time high with an average institutional discount rate of 54.5 percent for first-time, full-time, first-year students and 49 percent for all undergraduates. Despite acknowledgement that tuition discounting needs to be dramatically reduced, the trendline below shows no sign of change. 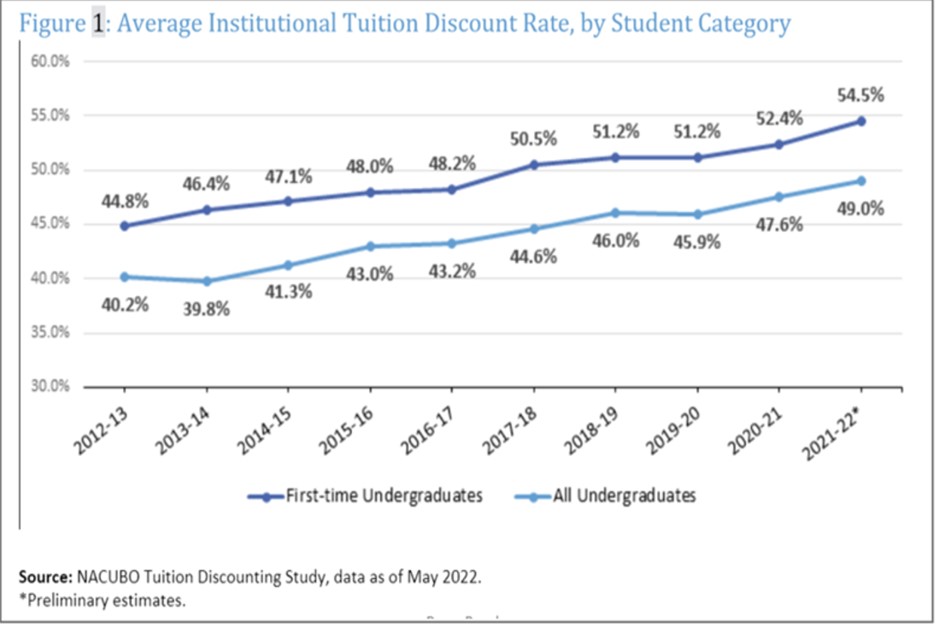 For-profit institutions were among the first to recognize the scale potential of online education and enroll a disproportionate share of online students. Recently proposed changes to the 90/10 rule for for-profits will make them less competitive and artificially inflate the costs of higher education. The aggressive marketing that leading Democrats use as a blanket charge against for-profit institutions ignores the fact that the two largest online providers are non-profits who spend the most money in media advertising. In addition, many OPM sponsored graduate degrees spend a substantial amount of money in marketing for their non-profit partners.

It is not often that a sitting college president writes a book about the decline of his industry.  Temple University president Jason Wingard’s book, The College Devaluation Crisis does just that. Early on, Dr. Wingard makes three statements that his book supports. These are:

Dr. Wingard echoes claims made by Mr. Merisotis and Dr. Weise when he writes “what the college degree does not tell anyone at all is what the degree holder knows how to do and is capable of achieving with that set of skills.” Dr. Wingard provides 10 recommendations for what alternative education providers and universities need to do to provide a skill-centered learning model that adapts to future jobs. He also provides five predictions. The two most interesting to me were:

My last comment before providing some conclusions about where all these factors are leading us is to reflect on my personal snapshot provided in part 2. I compared the costs for my brother and me to attend Towson University and Duke University in 1975-76. Fast forward to the academic year 2022-23. Cost of attendance at Towson is $25,420 vs. $2,423 in 1975-76. Cost of attendance at Duke is $84,517 vs. $4,224 I 1975-76. Towson’s costs are up 10.5 times, Duke’s are up 20 times, all while the median family income in the U.S. only increased 5.7 times over the same period. It’s no wonder that more and more families question the ROI of a college degree.

I think it’s pertinent to summarize some of higher education’s biggest challenges. In no priority, they are:

Institutions that are likely to thrive are elite universities, public flagships in states that can fund higher education at competitive levels, large online institutions, and alternative education providers aligned with large employers.

As I said at the beginning of the presentation, there are segments and topics that have been covered by numerous books, papers, and articles. This was intended to be a thought-provoking overview. Any questions?

(there were 13 slides In this final part of the presentation)